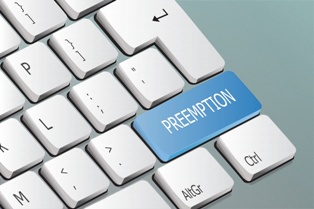 According to the United States Constitution, federal law must be followed by every state in the nation. That means that states can only enact laws that do not contradict federal law. This frequently complicated and nuanced legal concept is known as preemption, and it is often relevant in medical device injury cases.

In 2002, Essure got conditional pre-market approval from the FDA, and many women were given the option of a permanent form of birth control without surgery. Instead, during a doctor’s office visit, a woman could have a coil implanted in each fallopian tube. Over a few months, scar tissue would develop around the coils and prevent pregnancy.

Unfortunately, Essure had potentially dangerous side effects that many women didn’t know about before they consented to the procedure. Some of these women suffered significant pain, perforation of the uterus or fallopian tubes, migration of the coils into other parts of the body, and unintended pregnancies.

Some women began to file injury lawsuits. Bayer argued, however, that their claims should be preempted and not heard because Essure had PMA approval from the FDA.

Judges in California and Pennsylvania held that some claims against Bayer could move forward according to state laws because the state laws were the same as federal laws. These decisions allowed women to bring lawsuits against Bayer claiming negligent failure to warn, breach of warranty, fraud, and negligent misrepresentation.

Does Preemption Apply in Your Case?

Preemption is a powerful defense that could prevent you from making a fair legal recovery in your medical device injury case. Before you pursue a claim, you deserve to know about the strengths and weaknesses of your potential claim so that you can decide whether or not to seek justice.

The lawyers of Keefe Disability Law are committed to providing you with a thorough and honest review of your Essure or other medical device claim. The medical device manufacturer did not give you all of the information that you needed to consider all of your options and make a sound decision that was in your best interest—that shouldn’t happen to you again.

Therefore, we will provide you with an honest review of your potential claim so that you can decide whether you want to join or move forward with a mass tort medical device lawsuit. If you do have a case against a medical device maker, then we will fight hard to get you the compensation for your past and future medical expenses, lost income, out-of-pocket costs, physical pain, emotional suffering, and other damages that you deserve.