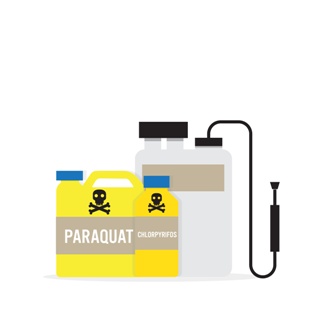 Paraquat is a highly poisonous, toxic herbicide that the U.S. Environmental Protection Agency (EPA) has approved for restricted use. In the United States, paraquat is used to control weeds and grass. Only commercially licensed users can use paraquat because of its toxicity. Unfortunately, these users are not fully protected from paraquat’s potential dangers.

Have You Been Exposed to Paraquat?

Paraquat isn’t always called paraquat. As an agricultural worker in the United States, you may use or be exposed to paraquat that has a different trade name, such as:

This list is not all-inclusive. Other forms of paraquat are also on the market.

Chevron Chemical Company and Syngenta make a lot of the paraquat used in the U.S. However, other companies also make and distribute this toxic herbicide in New England and around the country.

Paraquat Use in the United States

The EPA most recently approved paraquat in October 2020. At that time, paraquat use was at a 25 year high in the United States and used in all 50 states.

Paraquat marketed in the United States must have a blue dye and strong odor to prevent workers from confusing it with other non-toxic liquids. Additionally, it must have an added agent to induce vomiting in case of ingestion. However, paraquat that comes from other countries may not have these precautions.

Other Countries Ban Paraquat Use

Paraquat is common in the United States, but that isn’t true of all countries throughout the world. Many countries have banned paraquat completely, including:

Other countries have restricted paraquat use, including:

In 2011, a National Institutes of Health study found that people exposed to paraquat were 250% more likely to develop Parkinson’s disease than people who did not experience paraquat exposure. Since then, several respected medical journals, including The American Journal of Epidemiology, the Journal of the American Medical Association (JAMA) Neurology, and the National Institute of Environmental Health Sciences, have also published studies linking paraquat to Parkinson’s disease.

The research shows that paraquat may cause brain changes consistent with Parkinson’s disease. Paraquat may cross the blood-brain barrier and affect dopamine development in the midbrain. Dopamine is critical for muscle movement and without healthy dopamine cells a person may experience symptoms of Parkinson’s disease, including tremors, loss of balance, and an altered gait.

If your doctor suspects Parkinson’s disease, an MRI will likely be ordered to confirm changes in your midbrain.

Parkinson’s is a progressive disease with no known cure. Over time your movement, speech, bodily functions, and emotional health may be impacted.

Paraquat manufacturers, marketers, and distributors have known about paraquat toxicity and other risks and may not have provided you with sufficient warnings about those risks. Now, you are paying the price.

If paraquat caused your Parkinson’s disease diagnosis, you might have the right to pursue legal compensation for your past and future:

You may also encourage Chevron Chemical Company, Syngenta, and other paraquat companies to make changes that prevent other people from suffering Parkinson’s disease due to paraquat exposure.

Now Is the Time to Call a Paraquat Attorney

Our Massachusetts mass tort lawyers understand that it can be intimidating to pursue a legal recovery from a large company that wants to deny your claim, but you don’t have to do it alone.