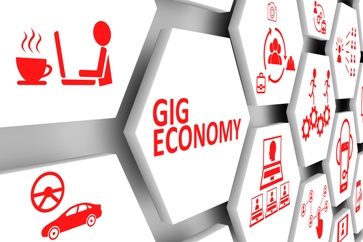 What Is the Gig Economy?

There isn’t a standard definition of the gig economy, but generally, the term includes independent contractors, temp workers, and other on-call workers who complete single on-demand tasks rather than working for regular wages. For example, the following workers may be part of the gig economy:

From 2010 to 2020, the number of gig workers in the American economy grew by about 15%, and that number is projected to keep rising through the next decade.

While being an independent contractor has many advantages such as flexibility and the ability to renegotiate pay often, it also has significant drawbacks. A gig worker does not receive regular wages, vacation time, health benefits, or a W-2 from an employer.

Instead, gig workers are independent contractors who must pay their own taxes. Gig workers who fail to declare the right amount of income and pay the right amount of taxes face potential legal problems and may not get the full amount of Social Security disability benefits they’ve earned if they become permanently disabled.

According to a 2019 report from the Center for Retirement Research at Boston College, gig workers in their 50s and 60s are 25% less likely than other workers to file for Social Security disability and 33% less likely than other workers to get Social Security disability benefits if they do apply. Researchers found that the following factors may contribute to this problem:

Of course, having enough work credits is just one eligibility issue you face if you are seeking Social Security disability benefits. To qualify for benefits, you must also prove that you have a permanent disability that prevents you from working for at least 12 months or that is likely to cause your death.

You can avoid this type of situation by working with an experienced Social Security disability lawyer before you apply for benefits. We will make sure that your application is complete and that it has all of the necessary supporting documentation.