What is Fournier’s gangrene? 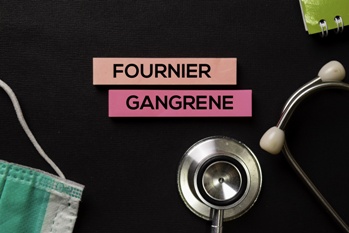 Immediate medical treatment is required to treat Fournier’s gangrene. Without it, the condition can be fatal. Therefore, there are some essential facts that you should know about Fournier’s gangrene—especially if you take an SGLT2 inhibitor such as Invokana to control your diabetes.

Fournier’s gangrene begins as an infection of the scrotum, penis, or perineum, which can spread to other areas like the thighs, stomach, chest, and bloodstream.

Symptoms of Fournier’s gangrene which require immediate medical attention include:

If your doctor suspects Fournier’s gangrene after a physical exam, then your doctor will likely take a tissue sample that will be sent to a lab for testing. Additionally, blood tests and medical imaging tests, such as an MRI, CT scan, ultrasound, or x-ray, may be used to confirm the diagnosis.

Even with treatment, however, the condition may be fatal. Many people who survive the infection will live with chronic pain and sexual difficulties.

Warnings Issued About Some Diabetes Medications

Most people live their entire lives without ever getting Fournier’s gangrene. When the condition does occur, it can happen because of a bladder infection, urinary tract infection, or hysterectomy.

Accordingly, the FDA required that a new warning be added to the prescribing information and patient medication guide of all SGLT2 inhibitors, including Invokana.

If you have been diagnosed with Fournier’s gangrene or if your loved one has died from this disease while taking Invokana or another diabetes medication in the SGLT2 family, then you may be entitled to a legal recovery.

You may be able to recover for all of your medical expenses, lost income, physical pain, emotional suffering, and other costs. However, you will have to fight for your fair recovery, and your time to pursue a drug injury lawsuit is limited by law.

We don’t want you to leave any compensation on the table. You’ve already suffered enough. Let our experienced attorneys provide you with a free and honest review of your claim. Schedule your free consultation by starting a live chat with us now or calling us at any time.