Student Loan Forgiveness for People With Total and Permanent Disability

On August 19, 2021, some 323,000 Americans either breathed a sigh of relief or whooped for joy—because that was the day the U.S. The Department of Education announced that their student loans would be discharged due to their total and permanent disability (TPD). The department pledged that some $5.8 billion worth of federal student loans for 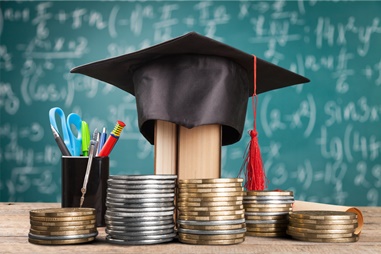 qualifying borrowers would be eliminated.

Naturally, there are plenty of other borrowers who would celebrate if their loans were forgiven, canceled or discharged. While the notion of getting out from underneath this often-crippling category of debt is no more than a pipe dream for many Americans, there is real hope on the horizon for others. That’s thanks to a recent flurry of initiatives aimed at addressing the outstanding Federal Loan Portfolio amount, which totals over $1.61 trillion as of February 2022.

With so many relief programs being proposed, announced, developed, and rolled out, however, it can be difficult to understand who’s eligible to have their student-loan slate wiped clean. There are also copious (and often complicated) factors that must be considered, including financial requirements, employment status, educational history, and more. Today, we’re focusing on student loan forgiveness as it relates to borrowers who have a total and permanent disability.

The State of Student Loan Debt in 2022

Over 43 million Americans owe the government money for student loans they’ve taken out. On average, the amount they owe is $37,113—but remember, that’s only the federal loans. When private loan debt is factored into the equation, the total jumps to $40,904.

Naturally, that means there are plenty of borrowers who would celebrate if their loans were forgiven, canceled or discharged. They remain frustrated with President Biden’s failure to deliver on his campaign-trail promises of student loan relief. As a candidate, Biden pledged that he would “immediately” cancel $10,000 each in student loan debt for some borrowers.

While the notion of getting out from underneath this often-crippling category of debt is no more than a pipe dream for many Americans, there is real hope on the horizon for others. That’s thanks to a recent flurry of initiatives aimed at addressing the outstanding Federal Loan Portfolio amount, which totals over $1.61 trillion as of February 2022.

And then there are the student loans that are in default, which total $124.4 billion. That translates into an alarming 15% of all student loan debt. At the heart of most, if not all, of these borrowers’ hurdles? The high-interest rates that make paying down the premium of one’s loans nearly impossible. In fact, in the next 10 years, borrowers in the U.S. are expected to pay $240 billion in interest alone.

One of the major issues that borrowers face is the fact that student loan debt is not usually canceled as a result of bankruptcy. Nonpayment of any kind of debt will result in a debilitatingly low credit rating, but for those Americans who are struggling with their finances primarily because of the high-interest rates on their student loans, not because of, say, credit card or medical debt, there is virtually no way out.

Representative Joe Courtney (D-Conn.) wants to change that. He has introduced a bill that would offer an alternative to forgiveness. It would lower interest rates on refinanced student loans to 0%, in the hopes of giving borrowers some breathing room and allowing them to catch up, at least partially, on their payments. While this bill has bipartisan support, there remain plenty of details to iron out—and taxpayers to convince.

Borrowers With Total and Permanent Disability

Back to the borrowers who are entitled to have their loans forgiven because of total and permanent disability. Who are they? And could you be among them?

Using data from the U.S. Social Security Administration (SSA), the Department of Education identified those 323,000 student loan borrowers who have a total and permanent disability (TBD), and then announced that it would forgive those loans—to the tune of $5.8 billion worth of debt. Known colloquially as a TPD discharge, this relieves borrowers from the obligation to repay a William D. Ford Federal Direct Loan (Direct Loan) Program loan, Federal Family Education Loan (FFEL) Program loan, or Federal Perkins Loan (Perkins Loan) Program loan. Qualified borrowers can also complete a TEACH Grant service obligation based on their TPD.

The disability discharge program isn’t new. It was introduced in 2016. But until recently, disabled individuals who sought relief had to fill out a formal application. Plenty of borrowers didn’t even know that they qualified under the TPD discharge program. That resulted in a forgiveness rate of only about half of all eligible borrowers.

Now, the process happens automatically, thanks to the SSA data match. If you are currently receiving SSDI benefits, any qualifying debt you have will likely be automatically forgiven.

The Education Department has implemented two other barriers to forgiveness. One relates to the requirement of TPD discharge recipients to report their earnings from employment; that had been waived previously, but the department has indefinitely extended the waiver. The other has to do with a three-year post-TPD discharge “monitoring period.” It used to be that if a recipient received over a certain income threshold, or if they were deemed to no longer have a TPD, the discharge would be revoked. That monitoring period has now been scrapped.

Find Out If You Qualify

By now, you’re probably pretty curious to find out if you qualify for a TPD. If you haven’t received notification of the automatic discharge process, or if you haven’t begun receiving SSDI payments for your TPD, contact us today. We can help you at every step of the way to receiving the benefits you deserve.