The ALS Disability Insurance Access Act was first introduced to Congress by one member of the House Representatives in 2016. 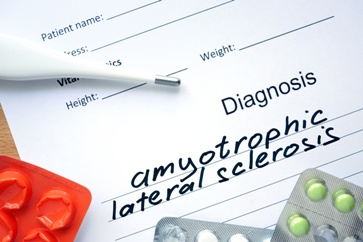 It took four years of hard work and dedication from ALS Advocates to get the bill passed. Over the years, ALS advocates reached out to members of Congress an estimated 54,000 times by various means, including phone calls, letters, social media posts, and personal meetings.

By the time the bill was voted on in late 2020, it had broad bipartisan support. Here’s what happened after the first Representative introduced the law:

In the four years between when this bill was introduced and its vote in the Senate, only 3% of bills were made into law.

The new law only applies to Social Security disability applicants seeking benefits after the law was enacted.

How People With ALS Qualify for Social Security Disability

ALS, also known as Lou Gehrig’s disease, is a neurodegenerative disease that is always fatal. Currently, there is no cure, and life expectancy is approximately two to five years. During the time from diagnosis to death, people lose control of their muscles and are often unable to breathe, eat, move, or speak independently as the disease progresses. Accordingly, they are unable to work.

While the Social Security Administration used to require people with ALS to have specific disabling symptoms before they could get benefits, that is no longer the case. Now, people with Lou Gehrig’s disease may qualify for benefits pursuant to Section 11.10 of the Listing Impairments. Section 11.10 requires that an applicant have:

Electrophysiological studies, such as nerve conduction velocity studies and electromyography (EMG), may support your diagnosis of ALS and may be submitted with your application.

Additionally, you must establish that you have worked long enough and acquired enough work credits to qualify for Social Security disability benefits.

Why You Still Need a Social Security Disability Lawyer

People with ALS qualify for Social Security disability benefits without the typical five-month wait period. However, a mistake on your application or a missing piece of documentation could delay your benefits considerably.

You don’t need the stress of completing your own application and hoping that everything is in order. Instead, we encourage you to contact our experienced Massachusetts disability lawyers for a free consultation if you, or someone you love, are seeking Social Security disability benefits in Massachusetts, New Hampshire, or Rhode Island.