Disability Fund Reaches Zero in 2016. Will Beneficiary Payments be Stopped or Reduced? Second Blog Post about the Disability Fund.

The Disability Fund holds a surplus that can be used if the annual payroll tax receipts for disability are less than the payments required to disabled beneficiaries. 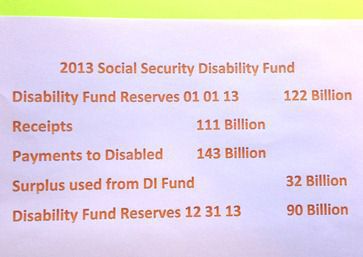 The amounts held by the US Treasury in the Social Security Fund are only the surplus of the receipts over the expenses from this year and prior years. The funds that you and your employer paid in during 2013 in your name were paid out in the same year to the disabled and aged citizens who are receiving benefits in 2013.  When you are older (or become disabled) you will receive from Social Security as benefits the funds that will be paid by workers and their bosses as payroll taxes in the year you receive the benefits. So if you retire in 10 years, in 2025, the payroll taxes paid in 2025 by workers and bosses will be received by Social Security that year and then paid out to you as benefits in 2025.

The Social Security Trust Fund holds a surplus if there is a surplus, meaning if there has been a period when the Social Security payroll tax receipts were greater than the benefits being paid. During those periods, the Trust Fund builds up and stands ready to help pay benefits even when the payroll tax receipts are less than the disability and retirement benefits being paid out.

How can this be fixed so that beneficiary payments can remain at 100%? Congress can re-allocate some of the retirement surplus to the Disability Fund, or Congress can enact structural reform. More about that in the next blog post.